Friday May 12th, I worked alongside DJ Jammin Jason (Jason Rullo) of Jammin Entertainment. Jason was contracted to DJ Norwin School District’s Prom for a 4th or 5th consecutive time at the Shriner’s Syria in Cheswick, Pa. Jason and I have had a few attempts at combining our sound & lighting systems but this year we wanted a very clean look yet powerful enough cover a room full of 600 kids.

Both Jason and I use the QSC K12’s with the QSC KW181 subwoofers. The only issue with the facility and our setup is that the dance floor is sunken below the stage and we did not feel it would be safe to place the subs on the floor. We believed that the kids would eventually attempt to dance on the speakers and we could not afford the risk of these kids falling off of our speakers. I thought it would be best to keep the speakers tight together in hopes to combine the sound rather than having it potentially cancel itself out by spreading it out. We had done this in the past so it was worth the shot of placing all 4 tops together. Both Jason and I could hear a “Coning effect” if we walked in certain direction past the speakers in an empty room. We both felt we could move forward with this attempt with 600+ bodies soaking up some of the sound.

We also combined our lighting systems and this time we wanted to include some lights on the back of the dance floor. I set up my LED Par’s with my (2) Inno Roll LED’s with wireless DMX connection on the back side of the dance floor. Then I got to programming so all of the light fixtures would work together seamlessly and without any delay or issues.

The Prom was a blast. The system sounded incredible and the lights were absolutely vibrant. We catered to as many requests as we could and kept the kids involved with the occasional shout out to different class man. I recorded some video on my GoPro Hero 4 Silver and took some still shots w/ Jason’s camera. Jason did catch some video on his camera while I DJed a little bit. Check out these photos and the video I made from the footage. We look forward to DJing Norwin’s Homecoming Dance on September 23rd. 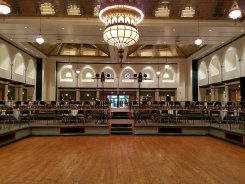